A short sentence describing what someone will receive by subscribing

Since I’m a passionate gamer, I mostly create costumes from titles I love playing. Watching the Sony conference at E3 back in 2017 gave me a new love: Monster Hunter! The trailer for Monster Hunter World just hit me like a rock and despite of having never played any Monster Hunter title before, I instantly became obsessed with the series. As a complete beginner I wanted to be prepared for the new game and so I started playing Monster Hunter 3 Ultimate, Stories, 4 Ultimate and finally Generations. While these games are full of amazing armor sets, especially the thunder doggo Zinogre struck a nerve in me. I fell in love with the vibrant colors, the silhouette and the beast itself. While charging up, the monster lights up blue, pulsing and creating flashing lightning bolts around it. And I wondered, if I would be able to transfer that to the Zinogre armor set in a cosplay.

So, I started collecting references. My main one was a figurine of a cute anime girl, wearing the armor with a hammer. While other images showed the set in turquoise, bright blue or dark blue, this version was deep blue and I liked this style the most. 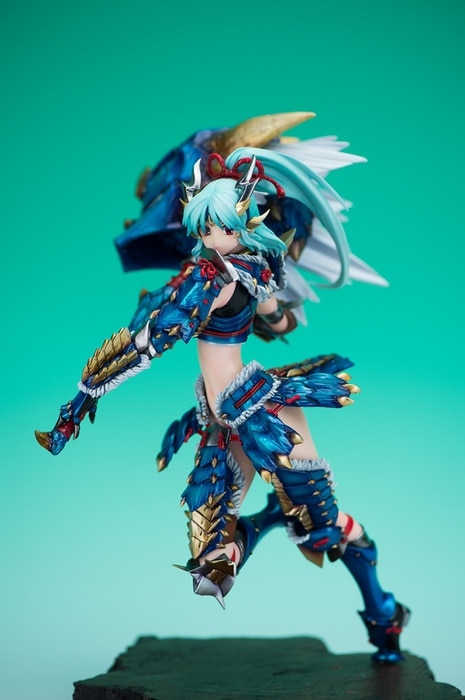 I also used images from the official art-book… 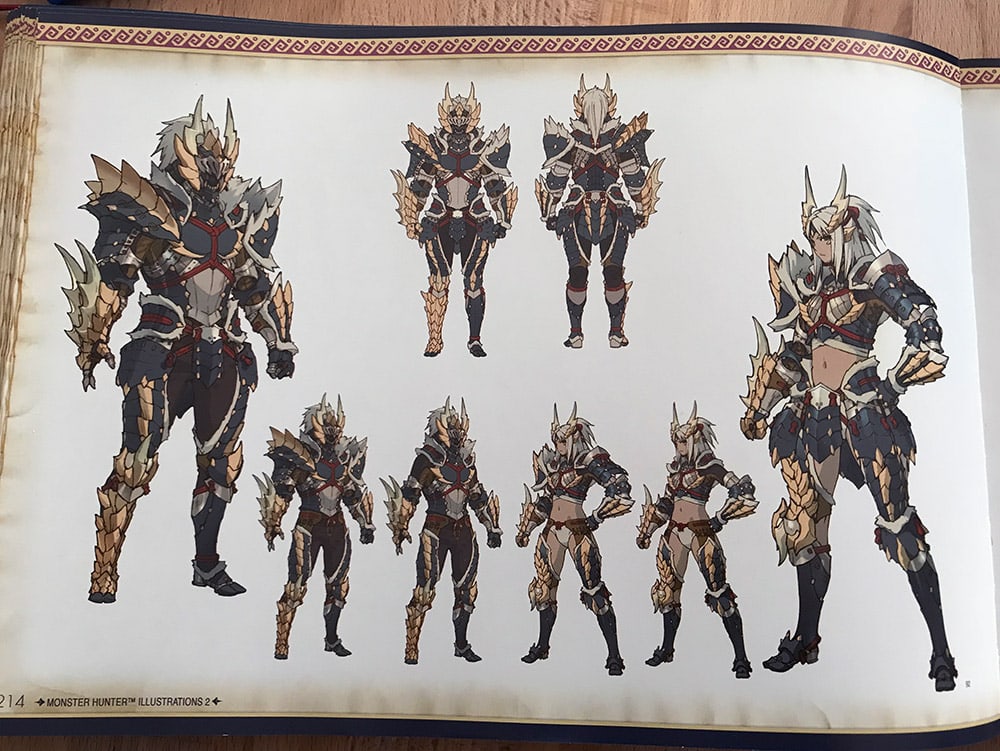 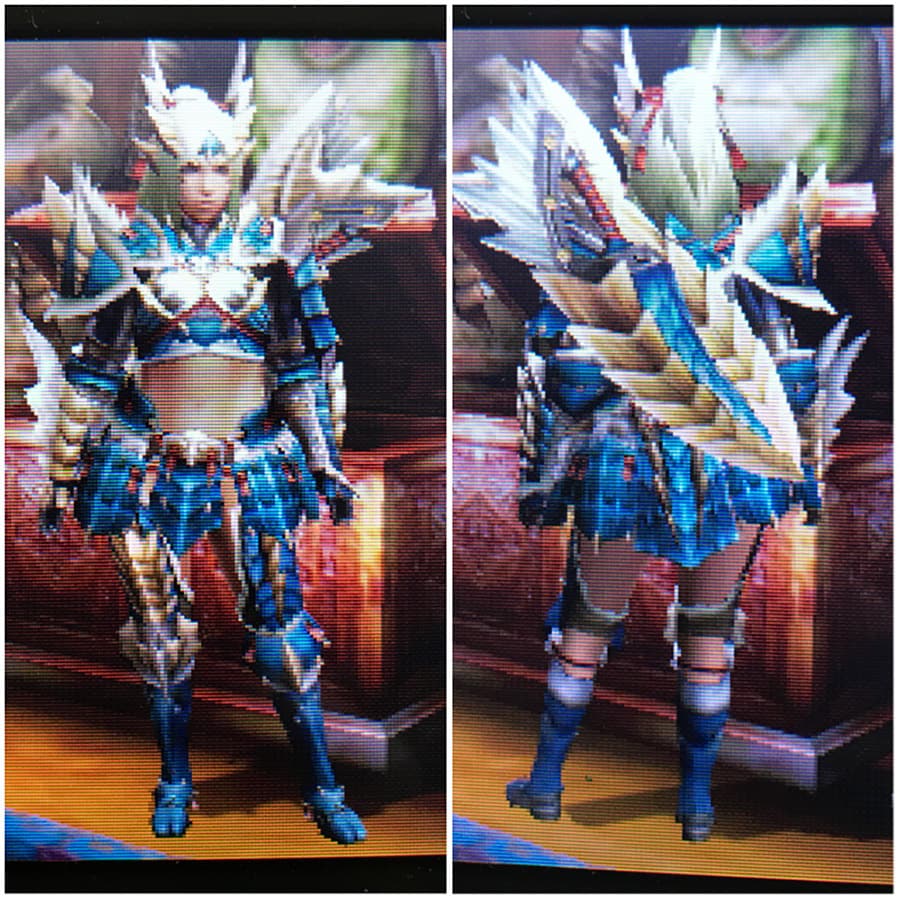 … as well as the Zinogre itself. 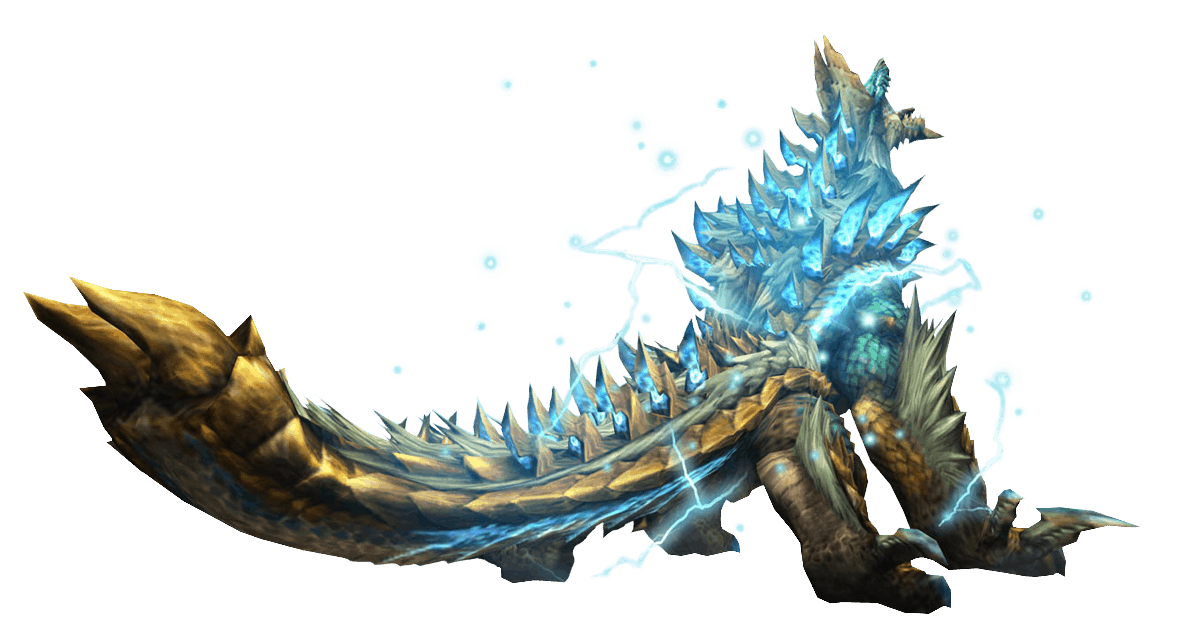 First, I began with the weapons. I usually build and completely finish one part of the costume first to have an orientation for the rest of the armor. Playing with dual blades myself, I though it would be a good start to figure out the right materials, colors and especially test the light effects I wanted to add.

As mentioned, I wanted to light up the armor as well as the blades; the yellowish scales to be more precise. A few years back I met two lovely girls at a convention who gave me a sample and a link to a white, slightly translucent foam and it seemed just to be perfect for this project. So, I ordered a few sheets in different thicknesses and was super excited about the result in combination with animated LED strips.

After figuring this out, I started with the dual blades. Benni drew me a blue print, which (you can also find in my shop). Guessing the right size took a few test prints, but finally I was happy and started tracing all shapes to black EVA foam. It isn’t as dense as my grey one, so it was more lightweight and easier to cut and dremel. You can find both foams at cosplayshop.be. I also used their contact cement glue, which dries super fast and creates a really strong bond.

I wanted to keep them nice and small and being able to separate if necessary, so I built in a base with PVC pipes which I could slide into each other. They were connected with small magnets at one point and luckily these were already enough to keep the whole thing together. 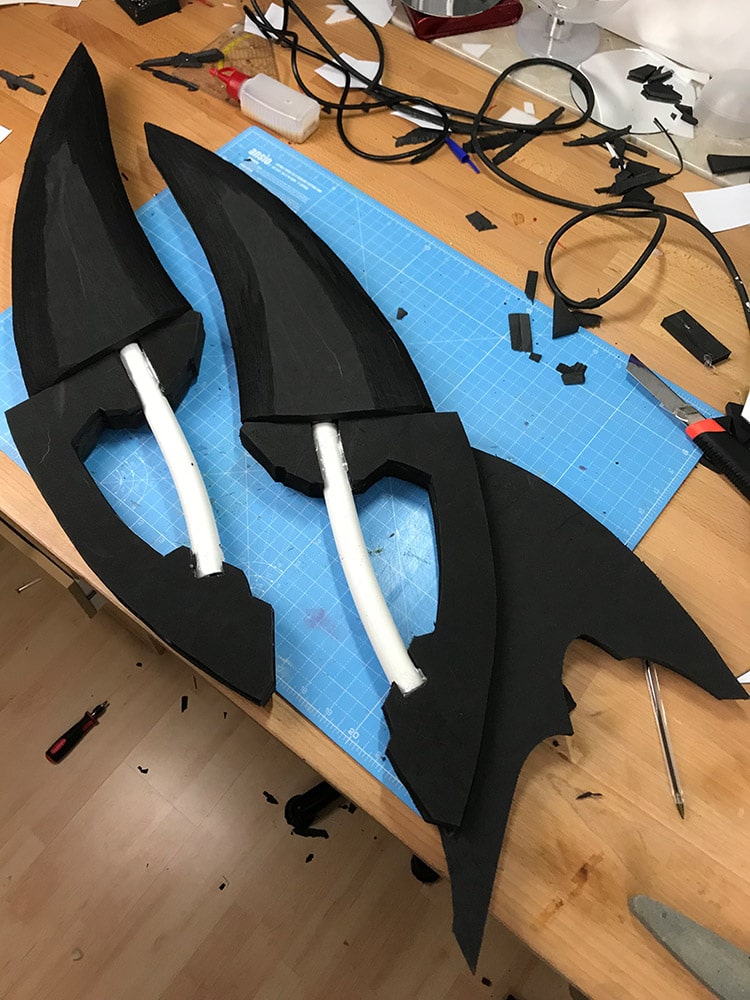 After adding a good amount of layers and details, this is what the blades looked like. I placed three LED strips underneath the white foam. The battery and circuit was hidden inside the foam and only getting rid of the grip allowed me to charge the battery. 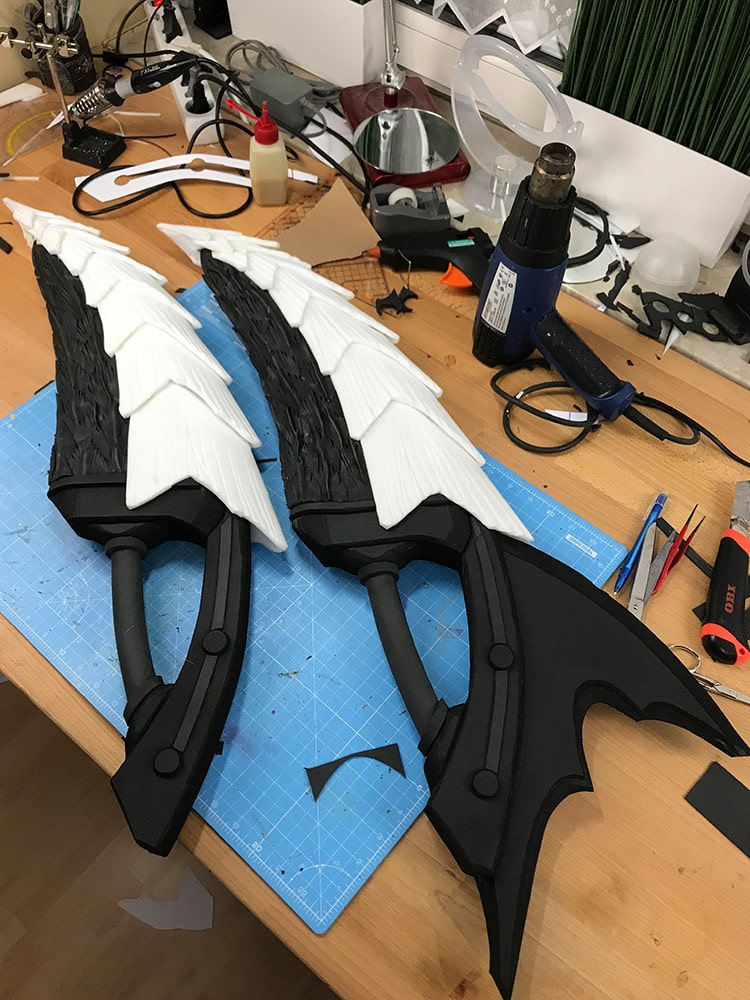 Here is a short making of the dual blades. As you can see, it’s really just foam, PVC pipes and some LED strips. Nothing fancy, but I’m really proud of the effect. I also programmed 4 different codes which were a steady blue light for photoshoots, a cool blue crawling animation as well as pulsing in blue and red. If you like to add fancy lights to your projects as well, just check out my Advanced LED Book. No programming or electronic skills necessary. I wrote it for beginners who just enjoy crafting and experimenting! :)

And this is what the final dual blades looked like. Benni gave them a lovely paint job with a vibrant blue and I was super happy that the light effects even shined through layers of airbrush colors. Also the blades turned out really lightweight and were quite easy to transport. I never made something like this before, so I was quite proud. 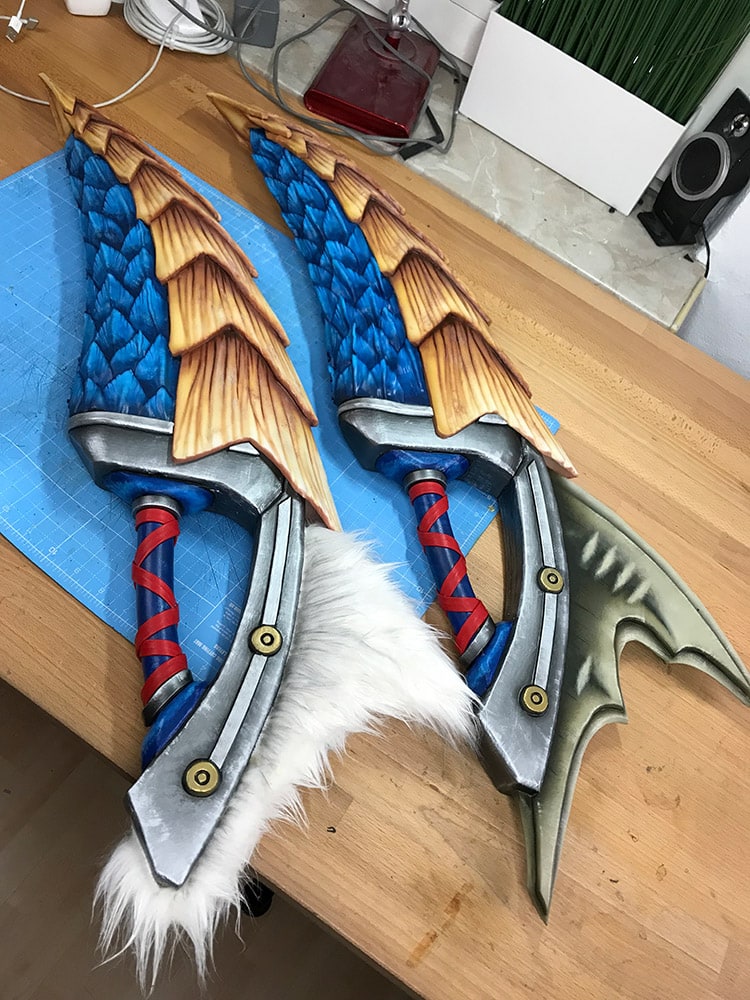 Next, I made the breastplate. As usual I just covered myself in plastic wrap and duct tape, drew the patterns on, cut them out and traced them onto 5 mm EVA foam. I actually wrote a blog entry about working with EVA foam as well as a full crafting book, The Book of Foam Armor, which shows you all kind of techniques for pattern making, shaping the material, priming and painting. 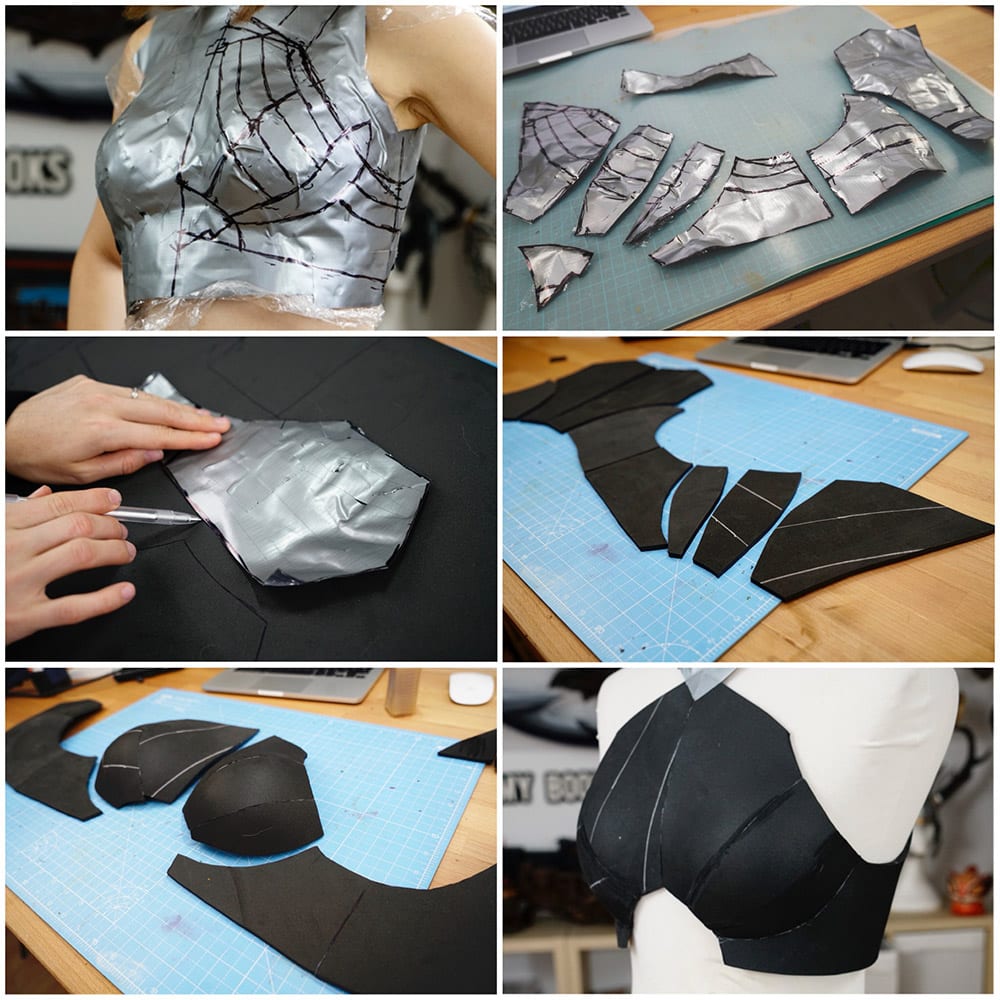 Afterwards I mainly kept on working with 3mm foam sheets and added more layers and highlights. The white scales were hiding further LED strips here. You can also see the wires pretty well here. Instead of installing a circuit and a battery to every costume piece, I actually placed wires which I planned to connected to a central system once the whole costume would be done. 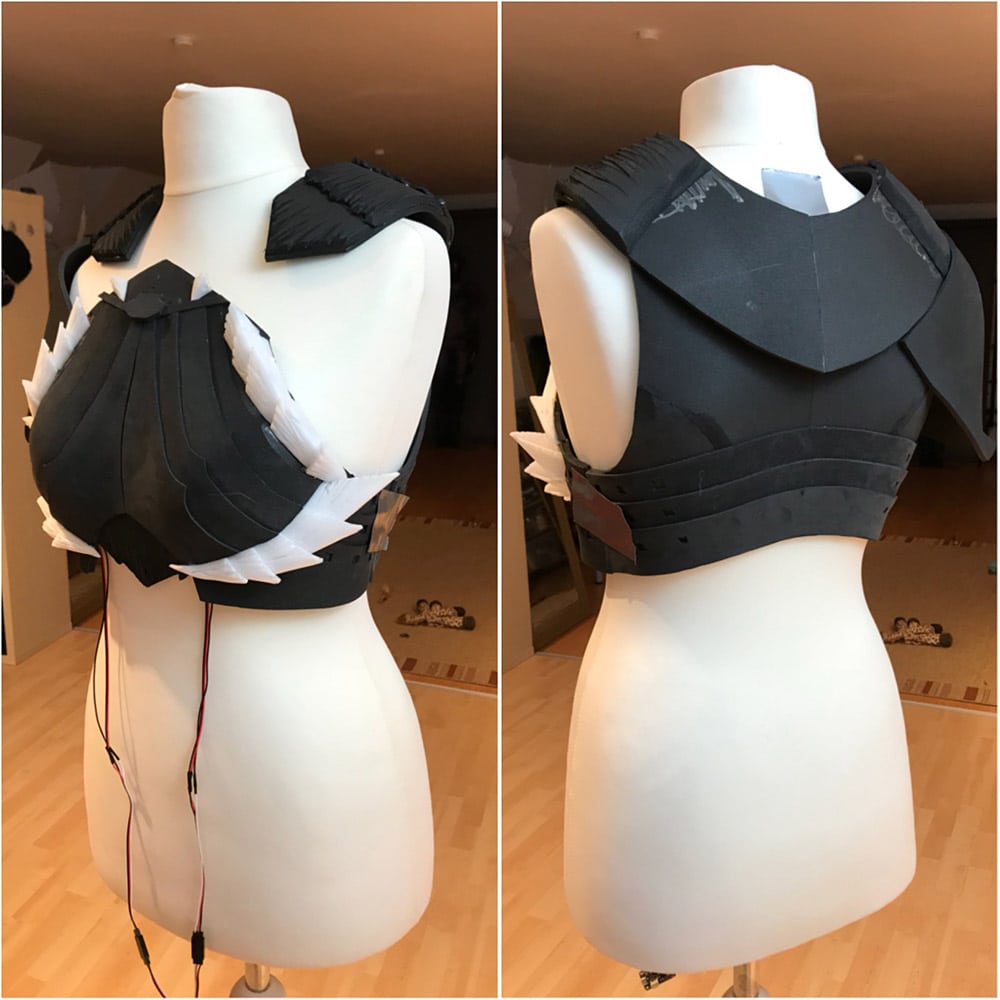 Aaaaaand… I added the shoulders next. Keeping the foam in shape was quite a challenge here and working with heat simply wasn’t enough. So, I made a basic layer out of 5mm EVA foam, bend it and glued a further, slightly larger layer of 5mm EVA on top. This way I secured the curves and made sure each armor piece will stay bended. 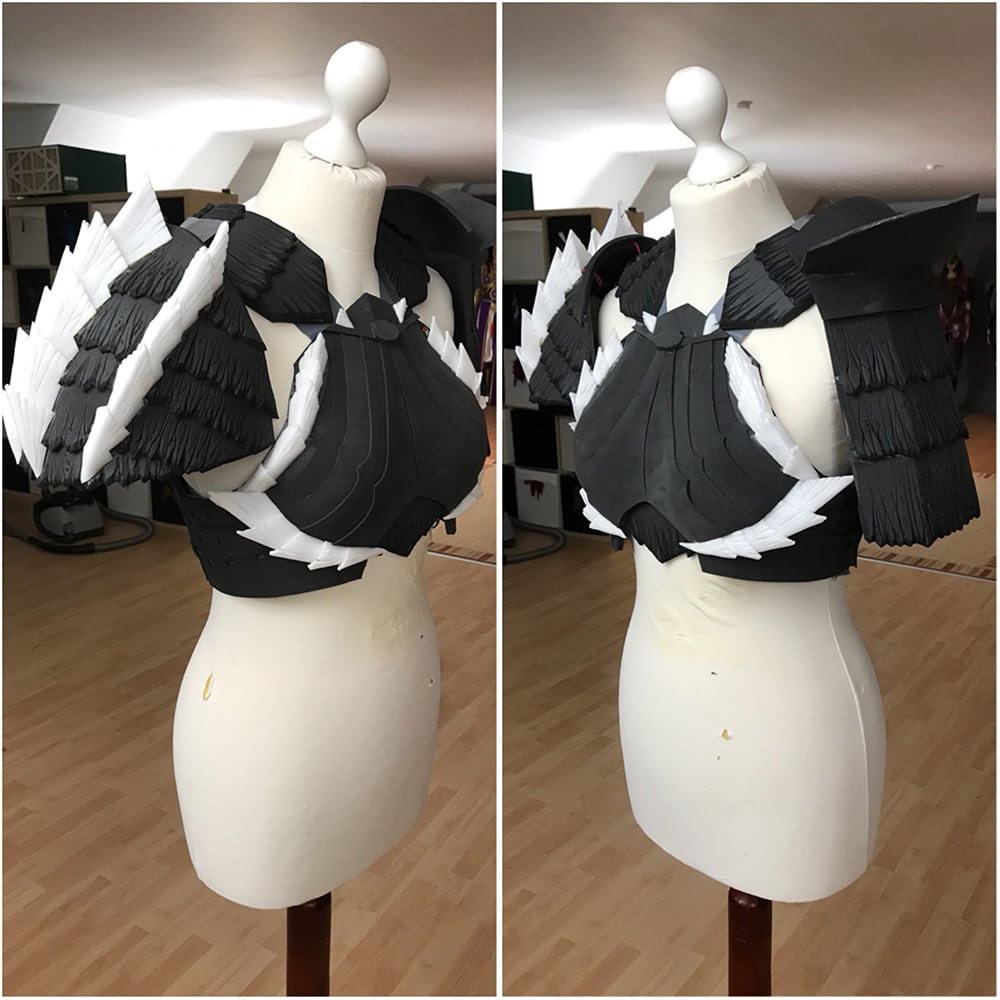 And this is the finished top of my Zinogre armor. The skirt consisted out of 8 separate parts which made attaching them quite tricky. 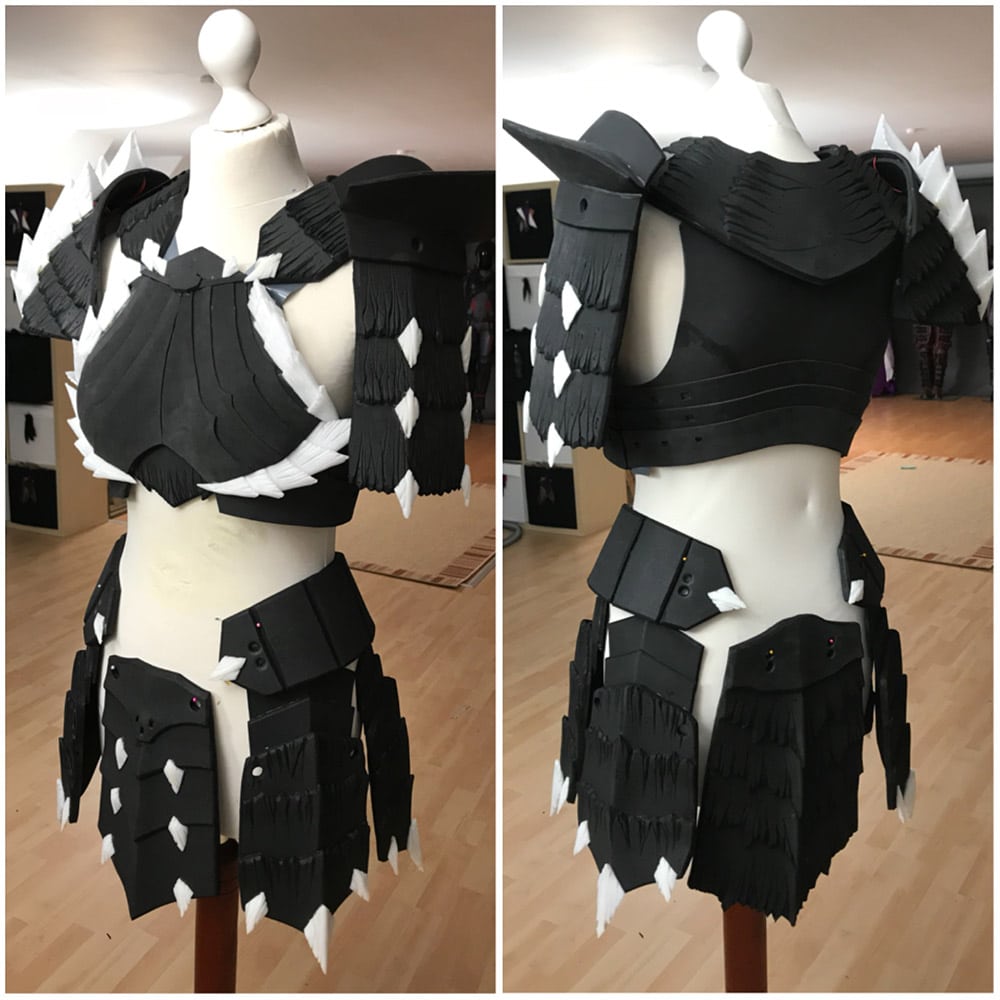 The Zinogre armor was supposed to be made out of monster parts like skin, claws, bones and scales, so I tried to give it an organic and natural look. I’ve never made something like this and so I just experimented with my soldering iron and box cutter as well. Instead of cutting the edges nice and clean, I made them rough and weavy. In addition I burned in lines and dots into the surface. The final result looked a little bit like bark or horns and I was happy with that. 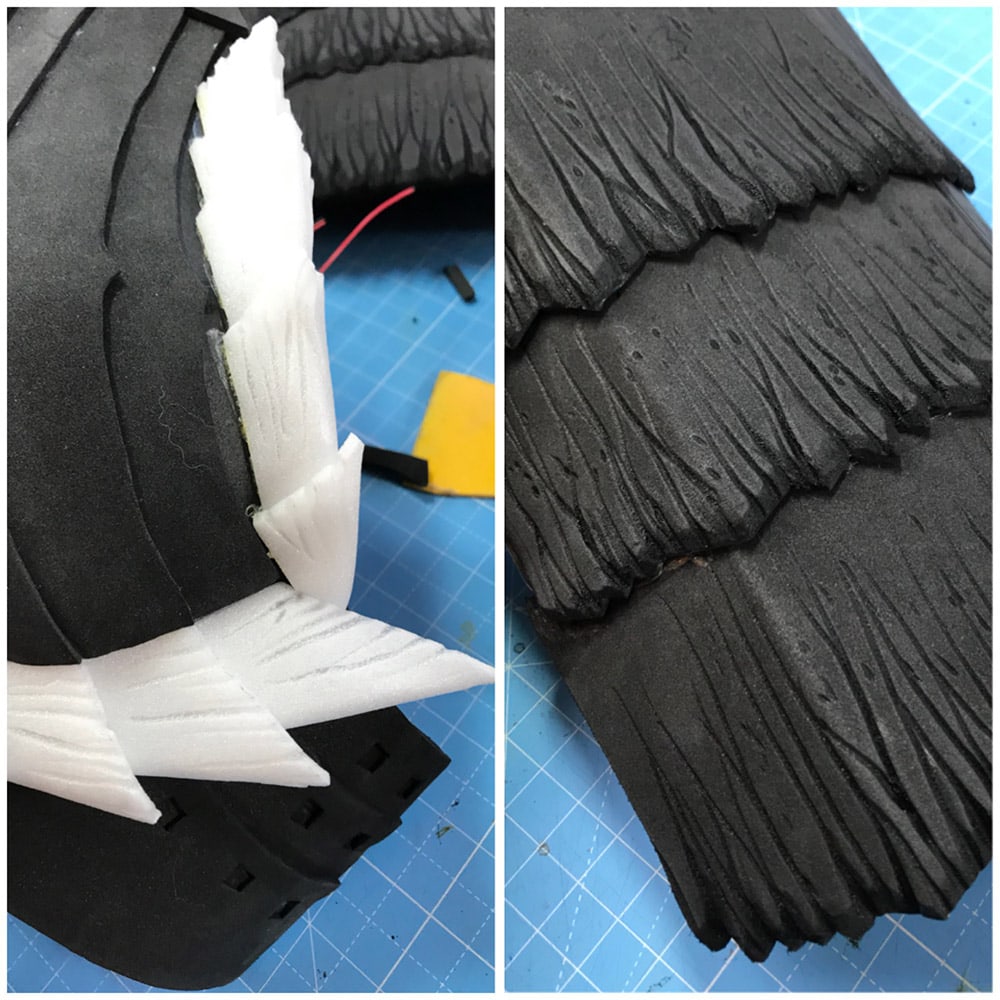 I also made a video of the armor lit up. All the cables are still hanging down, but at least everything worked so far.

Next up: the leg armor. While I love experimenting, I’m actually also a creature of habit that likes stay with techniques that work. So, I simply covered my leg in plastic wrap and duct tape, draw the shapes of my armor pieces on, cut them out, traced them to foam and add details. It’s really the same step again and again and while the result might look quite complicated, it’s actually quite simple to build something like this. 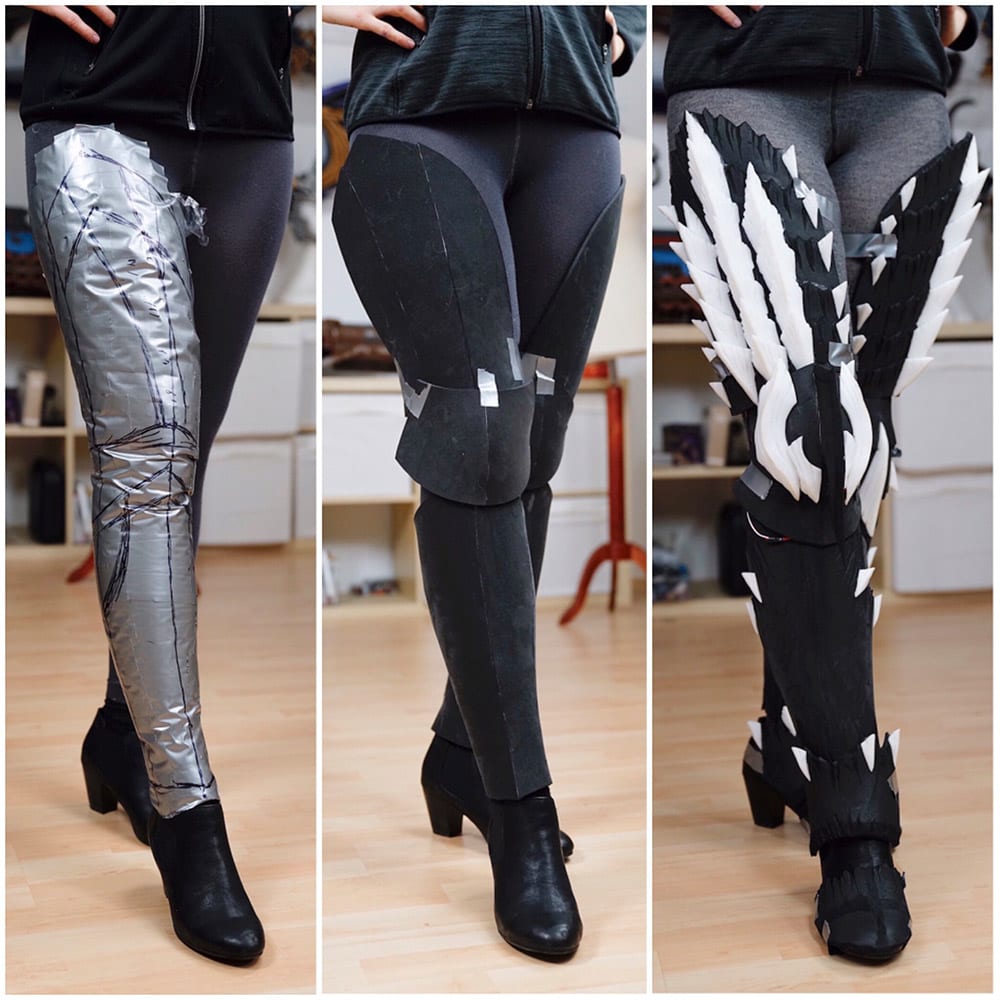 Here you can see the leg armor completely lit up and in movement. All pieces are attached just with duct tape, so it looks a little bit weird, but I’m sure you get the idea. The armor turned out actually quite comfortable and I didn’t feel limited at all.

Now the bracers! As you can see, it’s again the same technique. After finishing the base out of 5mm EVA foam, I only glued on a few pieces of LED strip, added a few details and the white translucent foam on top. 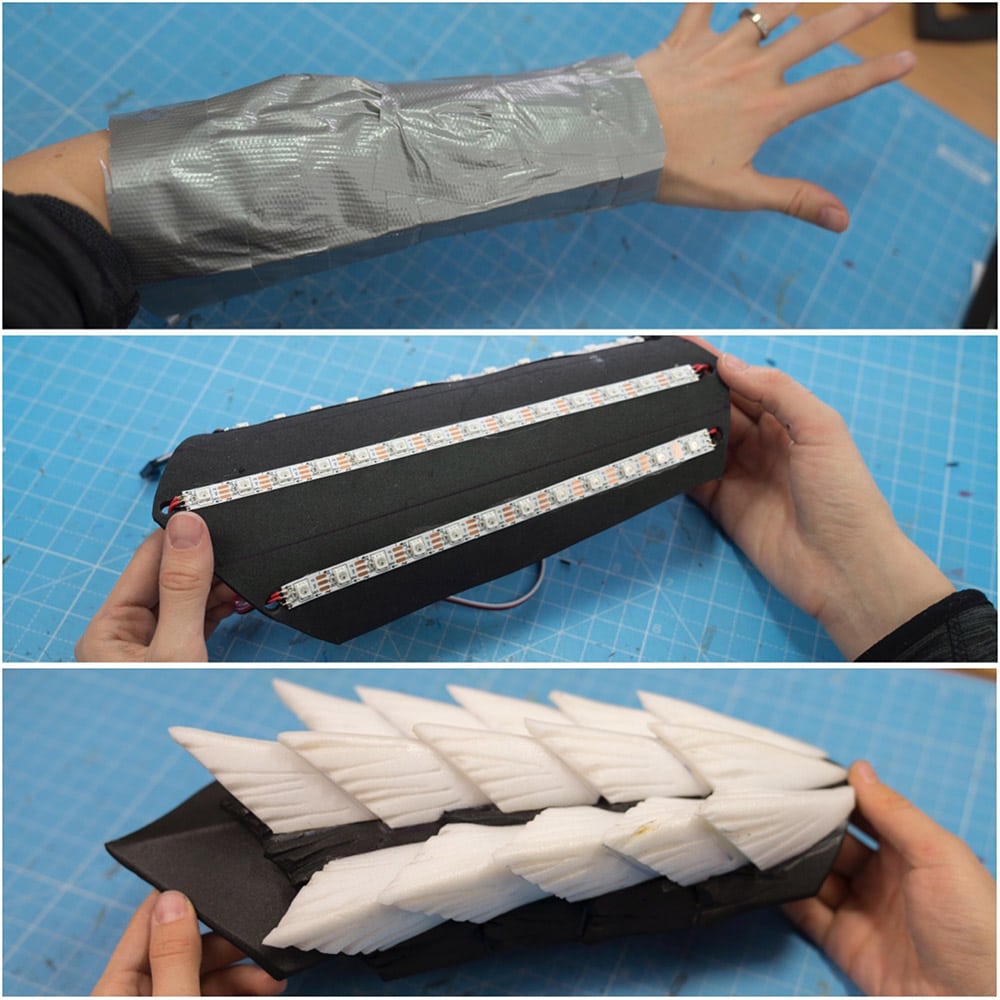 I was extra proud of my right bracer though, which was supposed to be a light up claw. While the bracer wasn’t a problem, finding a solution for the hand and fingers gave my quite some headaches. At the end I’ve sewed a glove, pre-wired the whole circuit on paper with a silhouette of my hand and sewed finally everything onto the fabric.

This part of the costume was clearly one of the hardest, but I was super happy how the claw turned out.

Finally the paint job. Before I could start though, it was time to prime everything. Benni applied three layers of Flexbond, a brush on primer which dries translucent and flexible. It’s a little bit like white glue mixed with latex. You may wonder here, why we didn’t used PlastiDip, just as we did in all our previous projects. The reason was that the translucent white foam was pretty bumpy and had to be smoothed out and filled with a brush-on primer. PlastiDip just wouldn’t do the job. In addition burning and sanding the black foam made it quite rough and heat sealing didn’t melt enough to smooth it out again. So, priming all parts by hand took a little bit longer, but it was clearly more affordable than using several PlastiDip cans and made the armor really nice and shiny. You might want to check out my review on different primers to find a favourite for your own project.

So, once all pieces were done, Benni finally begun painting. Are you wondering what I did meanwhile? Well, I was busy writing my Foam Armor Book and the finished Zinogre armor was supposed to be a part of it. This way we were able to finish the book as well as the costume at the same time. We are an efficient team!

To speed up the process, get a clear and even color application and just get some lovely and even gradients, Benni used an airbrush. Nothing fancy though. A machine for just 80$, but it totally does the job. Benni’s favourite colors are from Vallejo, which come in vibrant standard paints as well as shiny metallics. In addition these colors were transparent enough that the LEDs underneath were still able to shine through. You might want to check my Advanced Painting Book if you need any further information or just want to learn working with an airbrush as well. :) 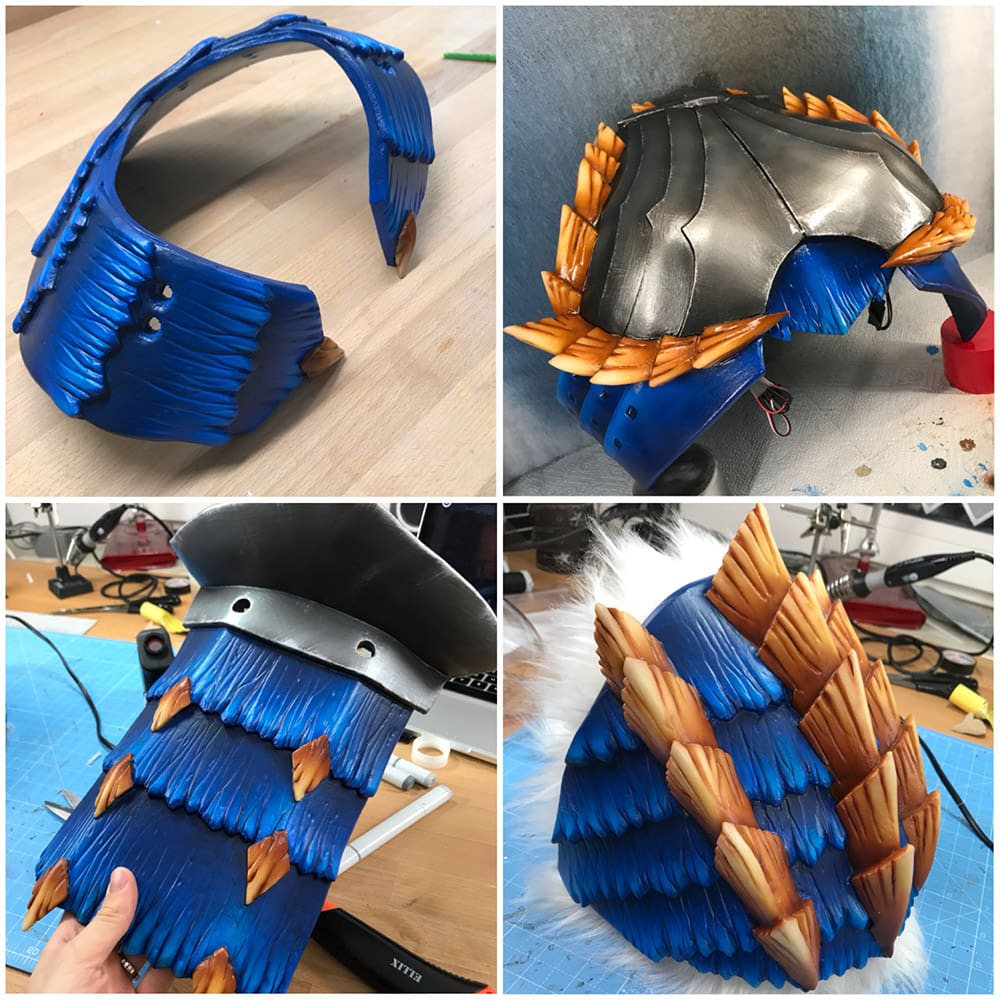 I also added a thick, red cord all around the armor and attached white fur onto the edges. The cords weren’t functional – just design elements. The real attachment was hidden inside the pieces and was mostly velcro and faux leather straps. 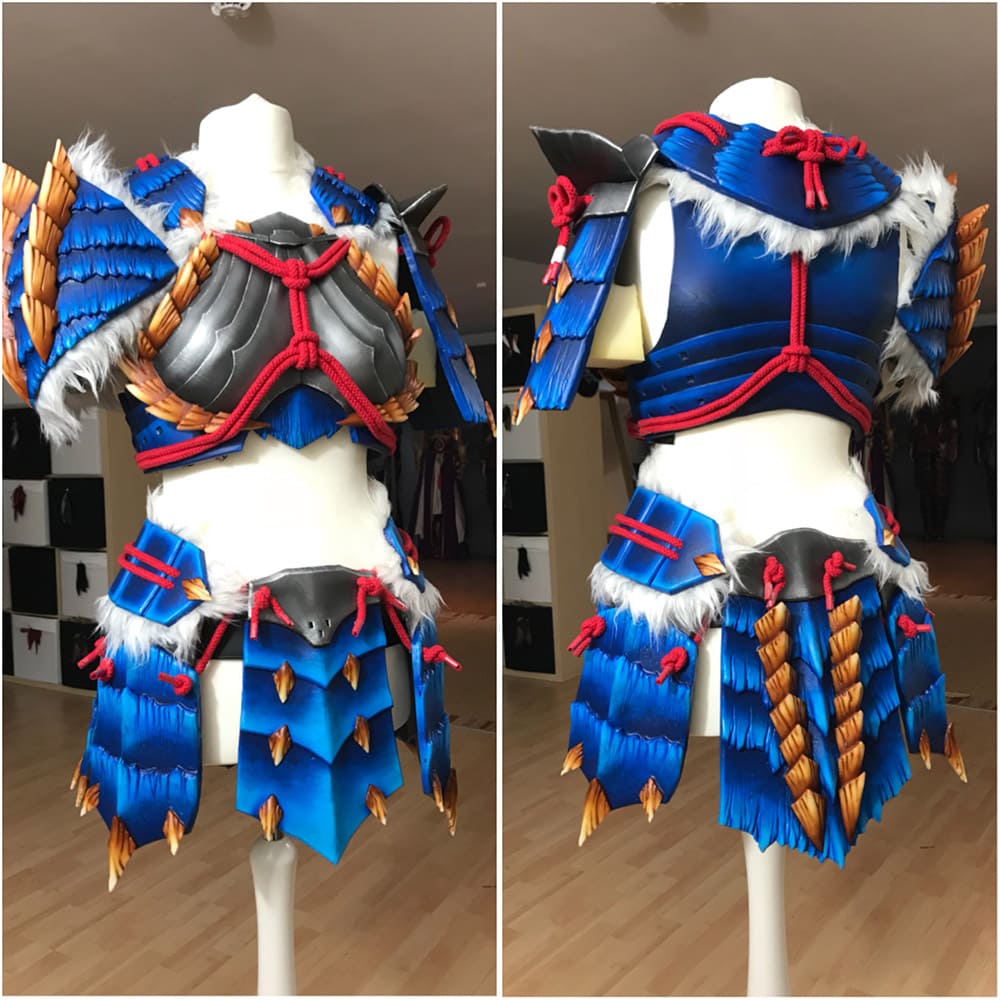 Once the leg armor was painted, I got pretty excited. The attachment worked really well and I had great movement. In addition I barely felt it’s weight since it was all really just foam. The only thing that took a while was connecting all wires with each other. 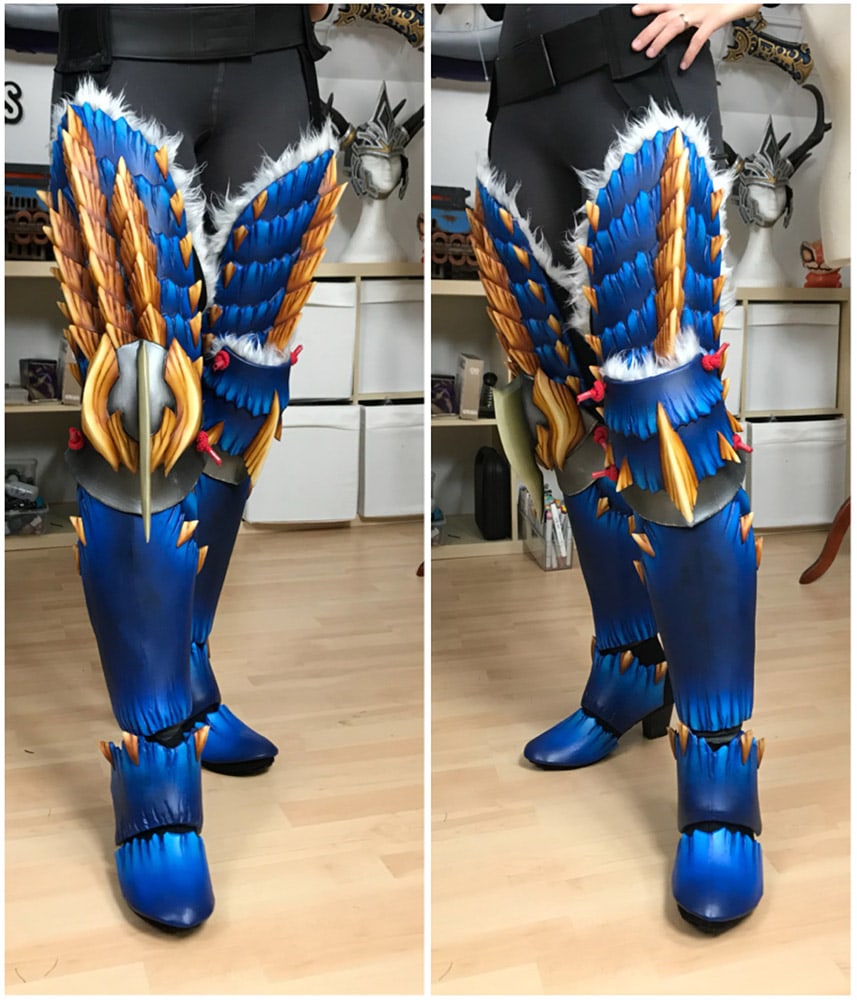 Well, and these were all the armor pieces. There are a few more than I showcased here in this blog entry, but pretty much everything else was made with the same techniques. Still, it took me quite some time to figure out all patterns, shapes and details and especially the mask/helm thing wasn’t easy. 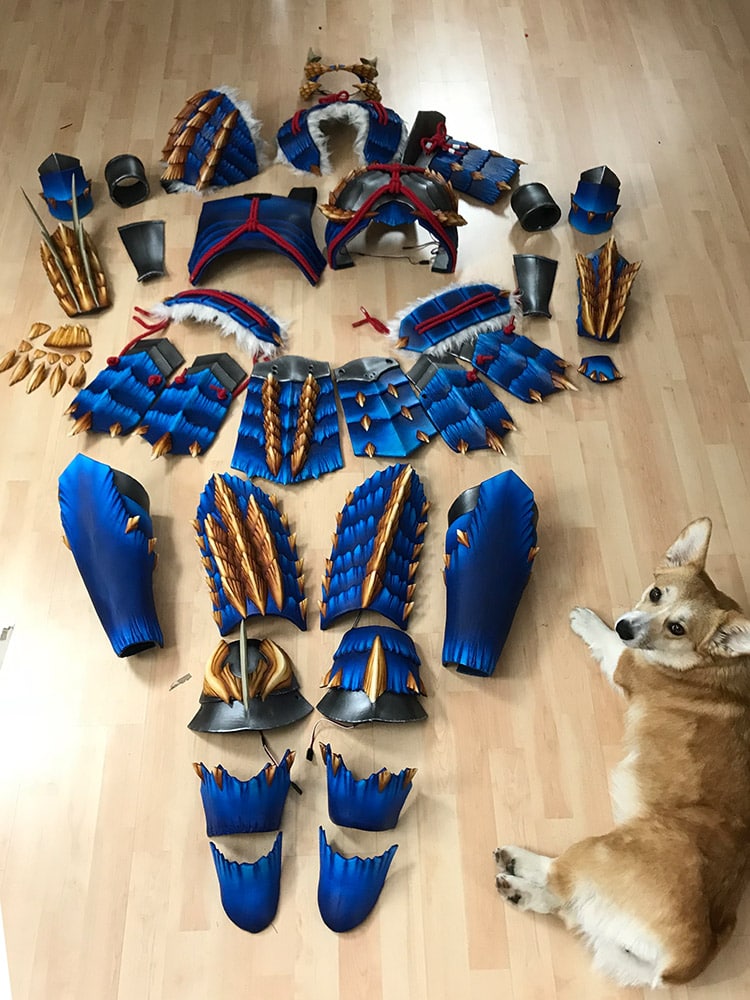 And finally the fitting test! Despite of looking super serious, I was actually pretty excited to try the costume on for the very first time! It was really comfortable and I loved the silhouette it created. As a hardcore Monster Hunter fan you might not agree with my color choice, but as I mentioned in the beginning there were quite a few options to choose from. I personally really like the blue, red, silver and brownish combination and wouldn’t change anything. 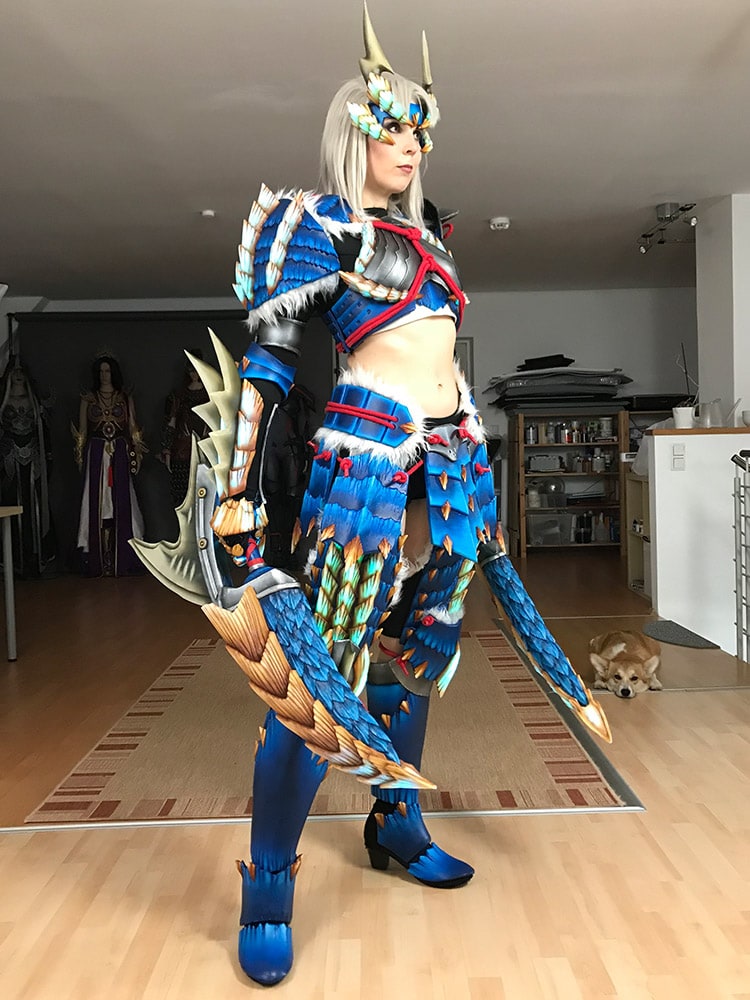 And here a few better photos. I still wanted to do a proper photoshoot on location, but we sadly still didn’t found time for that yet. Still, I’m really happy how these turned out! :) 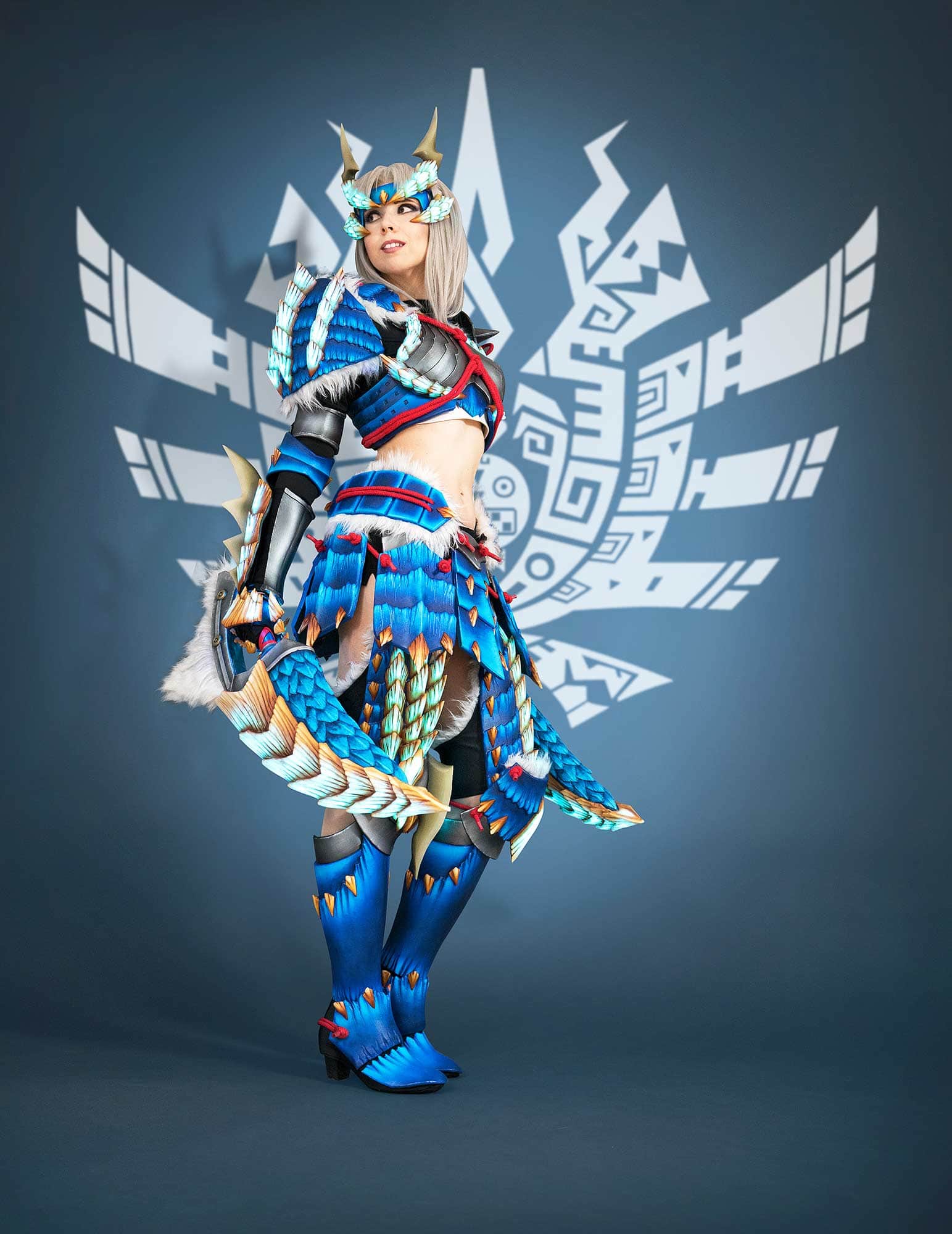 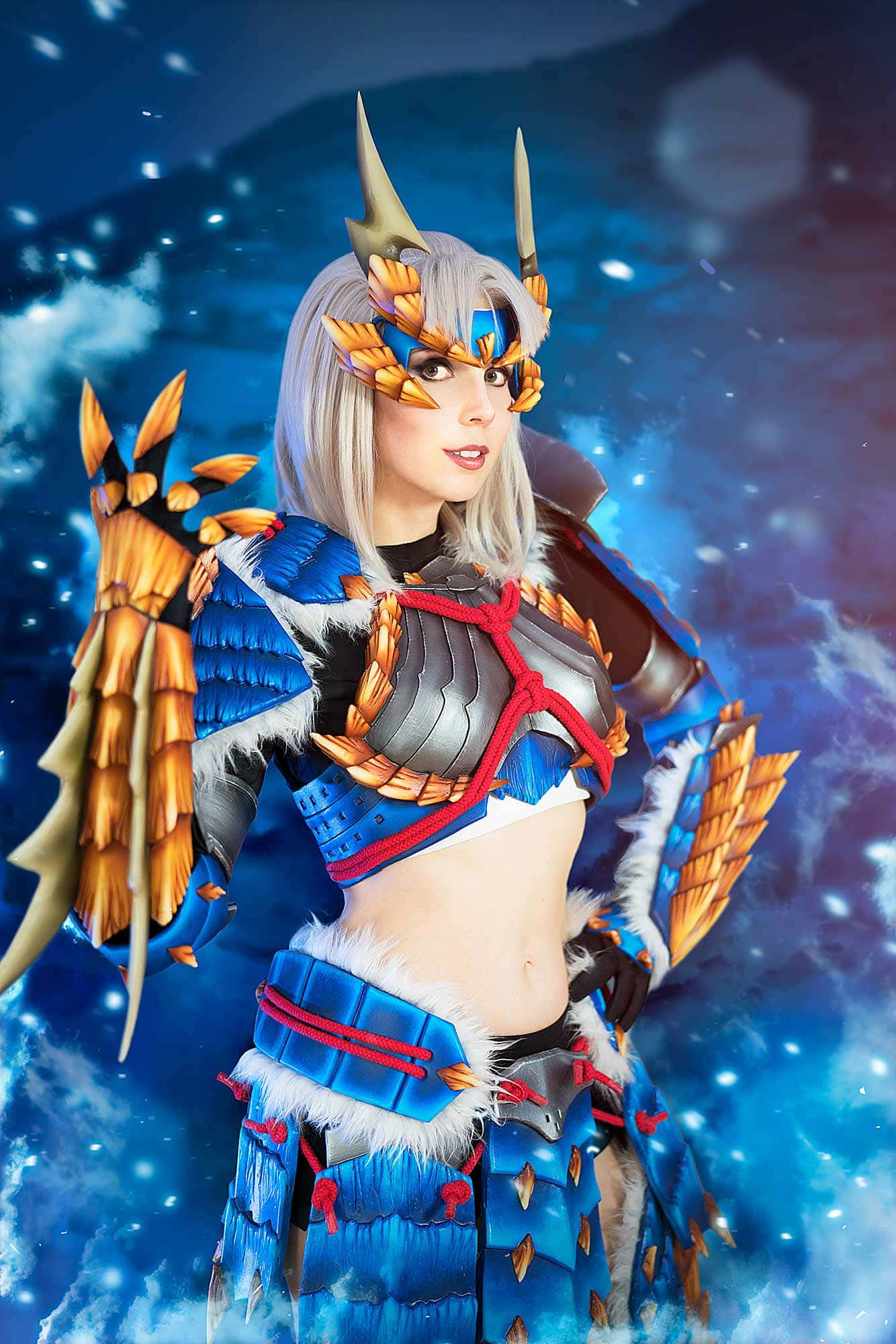 And last but not least, here are the detailed making of videos on Youtube! Just in case you want to see even more costume making progress! Also, check out my cosplay crafting books if you need some inspiration or help for your own projects!

A short sentence describing what someone will receive by subscribing